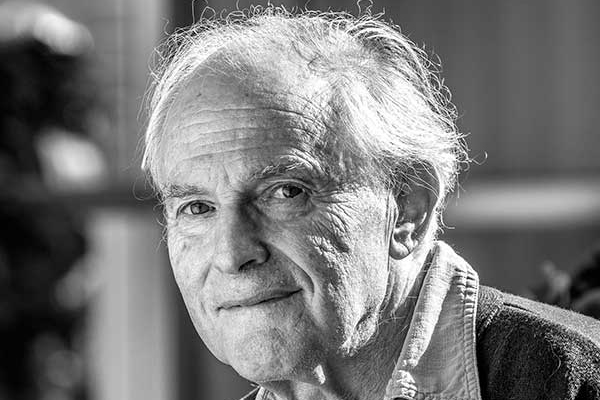 Sir Harry Kroto — a world-class chemist, teacher, mentor, friend and sometimes graphic designer —joined the Florida State University faculty in 2004, capping off a brilliant career that included the 1996 Nobel Prize in Chemistry for the discovery of the carbon-60 Buckminsterfullerene molecule, a novel allotrope of carbon after graphite and diamond. Harry shared the Nobel Prize with Robert Curl and Richard Smalley for their discovery of fullerenes which triggered major research endeavors worldwide, resulting in structures such as carbon nanotubes being created, and thus leading to the creation of fields of nanotechnology and nanoscience. And in another triumph for Sir Harry buckyballs have very recently been identified in space for the first time solving a century long mystery. He is one of only six Nobelists to have been on the Faculty at Florida State University.

Kroto was the driving force behind FSU’s GEOSET (Global Educational Outreach for Science, Engineering and Technology) program, which uses videos to teach youngsters about science, engineering and technology. GEOSET Studios is now a full-service video production studio offering creative services to the students, staff, and faculty at FSU. The team and studio space are located in Dirac Library.

“My advice is to do something which interests you or which you enjoy and do it to the absolute best of your ability. If it interests you, no matter how mundane it might seem on the surface, still explore it because something unexpected often turns up when you least expect it.”

Sir Harold Kroto joined the faculty at FSU in 2004 as the Francis Eppes Professor of Chemistry after spending a large part of his career at the University of Sussex, in England.  In 1996, Harry shared the Nobel Prize in Chemistry with Robert Curl and Richard Smalley for their discovery of fullerenes, a novel allotrope of carbon.  He is one of only six Nobelists to have been on the Faculty at Florida State University.

Harry enrolled in the University of Sheffield in 1958 as an undergraduate, and earned a doctorate degree in Molecular Spectroscopy from that University in 1964.  Harry’s University experience reflected his broad interests and especially his interest in the arts, athletics, and music.  He served as the art editor for the University’s student magazine, played what today would be considered inter-collegiate tennis, and was president of the Student Athletics Council.

Harry’s dissertation work can be classified as organic chemistry and it was during this period that he developed an interest in molecules containing chains of carbon atoms connected by multiple bonds.  His initial work involved the chemical synthesis of these and other classes of molecules but he quickly became interested in their spectroscopic characterization, leading him to a lifelong interest in molecular structure and quantum mechanics.   His interest in these exotic molecular species lead to research on long linear chains of carbon-rich molecules, which were known to be at relatively high abundance in interstellar space and in the outer atmosphere of some stars, called red giants.

C60 Buckminsterfullerene: The Celestial Sphere that fell to Earth

The Educational Revolution and the GooYouWiki World

The Birth of Natural Philosophy and its Prodigal Son: Science

C60 Buckminsterfullerene: The Celestial Sphere that fell to Earth

The Educational Revolution and the GooYouWiki World

The Birth of Natural Philosophy and its Prodigal Son: Science

A critical aspect of this work was to determine possible mechanisms for their synthesis under conditions that were thought to mimic the atmosphere of red-giant stars. It was this interest that lead to the collaboration with Smalley and Curl. In these experiments, graphite, which are flat sheets of carbon atoms connected by multiple bonds, was excited to very high energies and temperatures using lasers. The molecules that were created by this process were characterized by mass spectrometry and other methods.  Under these conditions, the mass spectrum showed the presence of a dominant product with a mass of 720 daltons that was composed only of carbon atoms.

Harry struggled to propose a structure of this molecule because all previous molecules also contained oxygen, hydrogen or other elements.  Principles of chemical bonding constrained the possible structures that could be imagined. Harry’s interest in art lead him to propose a structure analogous to the geodesic domes designed by Buckminster Fuller, which consisted of 60 apices, forming a mixture of 5-membered (pentagons) and 6-membered (hexagons) in the shape of a soccer ball.  He named the molecule “buckminsterfullere”, but they quickly came to be called “buckyballs”.  Although contentious when first proposed, subsequent work quickly confirmed the closed, carbon-only structure.  Studies on how these molecules were formed upon laser excitation of graphene lead to the identification of nanotubes and other molecules in widespread use today.  Harry continued his research at Florida State, pursuing a variety of projects in collaboration with Alan Marshall and Naresh Dalal.

In addition to his interests in chemistry, Harry was deeply committed to humanism and to science education.  He established the Vega Science Trust, which created high quality videos and films of lectures and interviews with leading scientists of the day, including a large number of Nobel prize winners.  This material was made available to the public and served as a video Wikipedia or streaming TV channel containing over 280 films.  At Florida State, Harry created GEOSET, short for Global Educational Outreach for Science, Education, and Technology, a publically viewable database and repository of science videos.  Importantly, the focus was less on “experts” and more on “afficonados” of science – including undergraduate and graduate students.  Harry used his fame as a Nobelist to travel the world and lecture on humanism and the importance of critical thought. He introduced thousands of young (and young at heart) people around the world to the wonders and accomplishments of science through his “buckyball workshops”.  His FSU lectures were characterized by a challenge for us to “think for ourselves” and to remain skeptical until confronted with compelling evidence. He always called  for us to care for each other with a common responsibility to help move society forward and to cherish Mother Earth. He had an amazing wit and was a huge fan of the legendary comedic group Monty Python so there was never a dull moment with Harry!

At FSU, each year he gave a wildly successful lecture series titled “Five Days of Opening Minds” which probed many aspects of cultural and creative activity from the Arts to the Sciences and was especially aimed at all students. Titles of these presentations included, “Science, Society and Responsibility”, “Créativité Sans Frontières”, “The Birth of Natural Philosophy and its Prodigal Son: Science”, “The GooYouWikiWorld and the Educational Revolution”, and the epic story of his Nobel discovery “Carbon 60 Buckminsterfullerene: The Celestial Sphere that Fell to Earth”. Thanks to GEOSET these events were recorded and are available for all to enjoy. Some of these are now available via GradWorld FSU.

If you have heard Harry speak before you will know these presentations are compelling, informative, thought provoking and always a lot of fun. If you have not heard Harry speak you are in for a real treat. No student should graduate from FSU without knowing something about one of its most famous faculty members.  And when you have heard one you will want to watch another and learn even more about the life and thoughts of “Sir Harry”.

Harry passed away on April 30th 2016. In recognition of Harry’s many scientific and humanitarian accomplishments at FSU the main auditorium in the Chemistry Science Laboratory building was named the Sir Harold W. Kroto Auditorium on October 5th 2019 when a two day symposium was held, and recorded, to celebrate his life and many achievements. A bust of Sir Harry can also be found on FSU’s Nobel Laureate Walk, located close to the Medical School.

*Written by Tim Logan (Associate Dean, College of Arts and Sciences) and Mark Riley (Dean of the Graduate School).